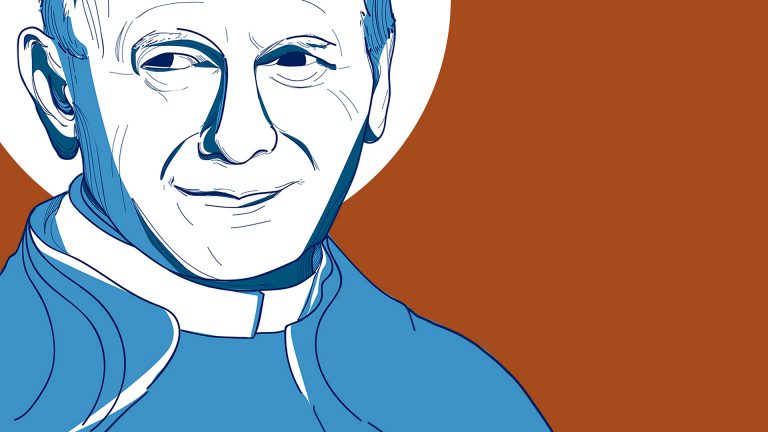 Millions of people flocked together for the funeral of Pope John Paul II in 2005, and later again for his beatification and canonisation. What possessed these people, including a surprising number of young people, to stand in the heat in a crowd for hours, some six years after his death? Almost none of them had ever spoken personally to Pope John Paul II. Their experience had been limited to a view from afar, or to a quick handshake for the happy few. Yet they had welcomed this man into their hearts.

His secret? He never kept anything for himself. His listeners felt that he truly cared for them and wished true happiness for each of them. In everything he said and did, John Paul II was completely focused on Jesus, with whom he had a very personal relationship. “Anyone who sees me, sees the Father”, Jesus said (Joh 14,9). In turn this blessed Pope showed Jesus to his flock. From the beginning of his pontificate he knew how to speak to the hearts of the faithful. “Open wide the doors to Christ”, he said, raising his voice at the acceptance of his papacy. “Do not be afraid”, he shouted to the crowd in St. Peter’s Square. From the very beginning of his pontificate, JP2, as the young lovingly called him, had a special message for young people: “You are the future of the world and the hope of the Church! You are my hope!” (22 Oct. 1978).

Karol Józef Wojtyła was born in Wadowice, Poland, on the 18th of May, 1920. From his earliest childhood Lolek, as his friends called him, loved sports. In 1938 he went to Krákow in order to study philology. He was also a talented writer, poet and actor. One year later the Nazis invaded Poland and he was forced into long years of arduous manual labour in a quarry. Together with others he founded a secret theatre. In this non-violent way, unlike that of some of his friends who took up arms, he took part in the resistance against the occupier. When in 1942 he discovered that God was calling him to the priesthood, he entered the clandestine seminary of Krákow.

Just after the Second World War, on the 1st of November 1946, Karol Wojtyła was ordained a priest. Shortly afterwards he was sent to Rome in order to continue his studies. He completed his doctorate in theology in 1948. During the summer months he visited a number of countries including France, Belgium and The Netherlands. In an article he wrote he made an interesting comparison between these countries. He noticed how French Catholics had a particular interest in spiritual growth. The inhabitants of the Lower Countries on the other hand were occupied with practical and outward matters like the founding of unions. Would this be the reason that in the 1970s new ecclesial movements flourished in France, while the Dutch Church became divided by conflict?

After his studies, Wojtyła was appointed as a priest in various parishes and as a chaplain at the university. Father Wojtyła spent a lot of time with his students. He regularly organised walking, skiing and kayak trips through the mountains. On a simple altar made of stone or on an inverted kayak, they celebrated the Holy Eucharist daily. During these trips they spoke about every possible theme regarding the faith and daily life of young people. They could ask anything they wanted to their wujek (uncle) Karol and he would always give them a candid answer. Later his bishop asked him to continue his studies. He completed his doctorate in philosophy in 1953 and became professor of moral theology and social ethics. Both at the university and the seminary, he continued his conversation with young people.

In 1958 Wojtyla was appointed auxiliary bishop of Krákow. As a bishop he participated in the great ecclesiastical deliberations of the Second Vatican Council between 1962 and 1965. There he impressed the other bishops with his knowledge, his way of thinking and especially his engaging personality. He was appointed archbishop of Krákow in 1964 and he was elevated to the cardinalate three years later. Cardinal Wojtyła became a major opponent of communism. He continually pleaded for freedom, human rights and the position of the Church.

Twenty years after his episcopal ordination, Cardinal Wojtyła was elected Pope on the 16th of October 1978. He was the first non-Italian Pope after the Dutchman Adrian VI who died in 1523. The unknown Polish Pope made an unforgettable impression on the crowds gathered at St. Peter’s Square with his human and humble words: “If I make any mistakes in your, no in our language, please correct me.” He demonstrated his great confidence in the intercession of Mary by inserting a large M in his papal coat of arms and by his motto: Totus Tuus (totally yours), Mary.

The first of his hundreds of trips brought John Paul II to Central America, where he showed the world a new way of being Pope. He achieved a great deal through his attention for truth and freedom for everyone. His visits to Poland and the diplomatic work of the Church contributed to the collapse of communism in Eastern Europe. His fierce but peaceful fight to obtain this did not make him loved by everyone: on the 13th of May 1981 he narrowly survived an attempt on his life.

Two years later the Pope invited young Catholics from all around the world to a meeting of prayer, sharing and joy in Rome in April 1984. The next year he proclaimed Palm Sunday to be the annual World Youth Day (20 Dec. 1985). No other Pope ever managed to engage so many people as John Paul II did. Over 5 million people gathered at World Youth Day in Manila in 1995. The enthusiastic crowd called out to him: “John Paul II, we love you!” The Pope responded: “I am an old man”. And the crowd cried: “Lolek, Lolek!” At which the Pope responded with his particular sense of humour: “Lolek is not serious, John Paul II is too serious. You may call me Karol!”

His message was clear but not easy. Time and again he called on his listeners to dedicate themselves totally to Christ and to accept the consequences in their own lives. Still, the (young) people continued to come and listen to him. In his enthusiasm, he frequently departed from his written text, much to the despair of his staff. He would then call himself back in line with a comment like: “Back to the text” (e.g. 13 Jan. 1995).

Amongst the subjects of his teaching are, for example, the importance of prayer, the Christian vocation, the defence of human life for everyone – also for the weakest – and the dignity of man, which is attacked by oppression, enslavement and consumerism. He proclaimed Jesus’ message in terms of truth, peace, faith, freedom, liberation from fear, hope, and above all of love.

During the pontificate of Pope John Paul II, the moral influence of the Church increased. He wanted the Church to respond to the many modern challenges in the world. He started a worldwide New Evangelisation, using modern technology and communication methods. The Holy See gained diplomatic relationships with more and more countries. The Church’s opinion on matters of peace, world population, human dignity and human rights, the position of minorities and human freedom, is now of great importance in world politics.

Through his unique charisma, John Paul II deeply touched many people from all over the world. In him, they each recognised something of themselves. This Pope was both a poet and worker, actor and academic, a political activist and a world leader, a mystic and a priest. He looked at the world with an open and friendly eye, and let himself be touched by what happened around him. Many remember the tenderness with which he kissed a baby that was handed to him from the audience, but also the fierceness with which he called out during the Angelus: “No more war!” (16 Mar. 2003). Furthermore he was a simple man without pretentions. Notwithstanding his heavy responsibilities, he always remained himself. He had attention for the people around him and had a love for Polish jokes and desserts.

The true source of the charisma of John Paul II can be found in his personal relationship with Christ. Everything he said and did was based on this indestructible foundation. The only way to understand this mystic Pope is by considering the way in which he devoted himself to God in everything. He rose early and started his day with prayer. He let prayer intentions from all over the world be brought up to his private chapel, so that he could pray for everyone. It is because of his intimate relationship with Jesus that he was able to speak everywhere with passion about the love for the Lord – in the streets, in churches or in stadiums all over the world.

The Jubilee Year 2000 brought some 25 million pilgrims to Rome. The Pope repeated to the 2000 Dutch pilgrims what he had said earlier during World Youth Day, quoting Saint Catherine of Siena (Letter 368): “If you would be what you should be, you would set ablaze the entire earth” (7 nov. 2000).  This was also a year of purification. The Pope asked forgiveness for the many wrongs done by people throughout the history of the Church.

During this year it was clearly visible that the Pope was ageing. Due to his illness it became more difficult for him to walk and speak. Nevertheless, he continued his apostolate and thus became a living example of the dignity of man, one which is not affected by illness or age.

Pope John Paul II died on the 2nd of April, 2005, while thousands of faithful were gathered in St. Peter’s Square, praying beneath his window. During several days the traffic around St Peter’s was blocked by a queue of several kilometres, in which people were patiently waiting until it was their turn to personally take leave of this great Pope. In total some 4 million pilgrims came to Rome in order to show their affection and to pray for the deceased Pope. He was beatified on the 1st of May 2011 by Pope Benedict XVI and canonised on the 27th of April 2014 by Pope Francis.

We use cookies on this site to enhance your user experience. No personal information is stored.AcceptNoPrivacy Statement